Things Are Not Always What They Seem

7:45 am on a local four lane road. The car ahead of me is going about 10 mph below the posted speed limit – travelling in the right lane with his left turn signal on. I’m stuck. Many of the passing cars noted the turn signal and provide the driver sufficient room to move into the left lane. But after a momentary pause, with the driver of the slower car appearing to be oblivious, the cars barrel along past him.

Finally there is an opening and I am able to pull to the left and pass. The driver appears to be very much in his thoughts and seemingly unaware of his blinking turn signal.

Pulling back into the right lane ahead I note in my rear view mirror that the emergency flashers were on (not just a single turn signal). I catch a glimpse – it appears that the right front tire is one of those emergency spares.

This seemingly oblivious driver was perhaps the only one I have ever seen to heed the maximum speed limit for an emergency spare. He was following the rules. 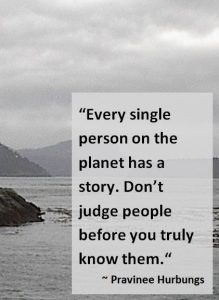 Things are not always what they seem.

Every day we encounter frustrations with bosses, co-workers, store clerks, or the young man at the fast food counter. We make decisions about the context of the circumstance using a frame of reference based on our past experience.

Things are not always what they seem.

Perhaps I have got you thinking now – what are some of your examples – funny or serious? You might enjoy this list of 6 things that annoy us – explained by science.

“Every single person on the planet has a story. Don’t judge people before you truly know them. The truth might surprise you.”           ~ Pravinee Hurbungs

This week . . . . have a heightened awareness about how you perceive everyday situations that occur around you. Things are not always what they seem.

Get to Know Tom

I am both a problem solver and a mentor.

“The problem is . . . . we have not adequately defined the problem.”